Please join us in welcoming three new Ajijic residents: Allan Gonce and Craig Steven Gonce, and Allan’s mother, Judy Gonce-Chilton, through a story written by Jet Metier. Jet was invited to visit with the three newcomers at their beautiful home in Ajijic.

There, after a tour of their lovely home, Jet had a delightful time with Allan, Craig and Judy on their expansive veranda with a gorgeous view of Lake Chapala while learning more about what brought them to set up their household in this corner of Mexico and where they had discovered their forever home. 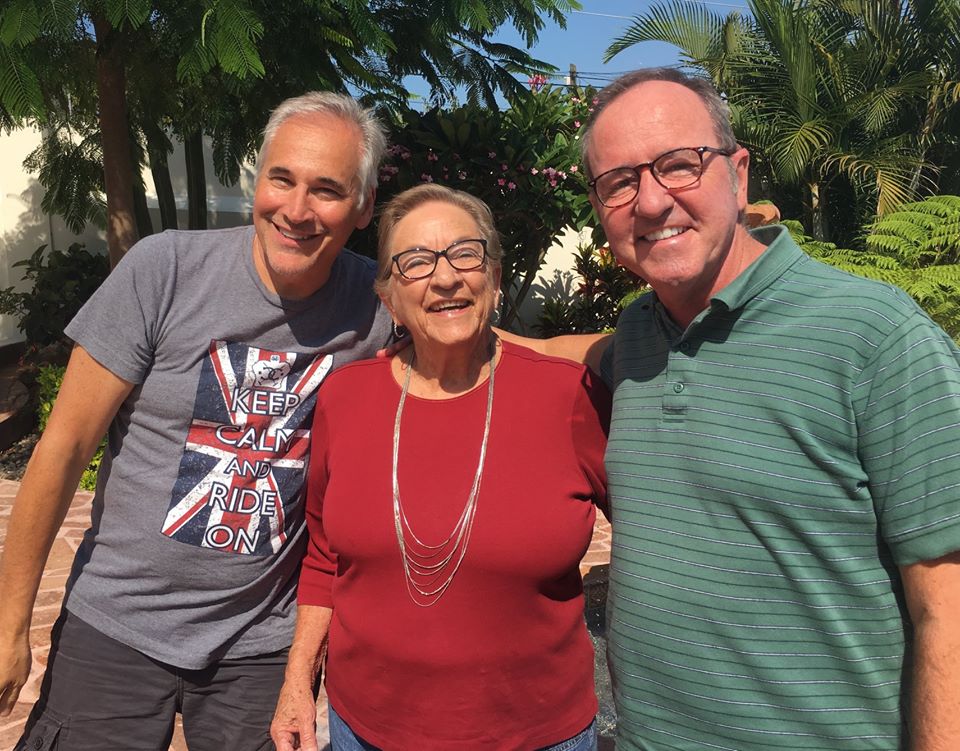 A Home That Was Meant to Be

Their trip from the US to their new home in Ajijic had not been going well. In the US, Craig had been given grief by airline personnel about how his bag was 20 pounds overweight, and now, as they were about to deboard in Guadalajara, Allan worried about Judy and how the travel and overall stress would affect her heart problems. They had their two dogs with them, both of which were slightly loopy from the mild doggie downers the vet had given them to make them at ease during their experience in the plane’s passenger section, Judy was in a wheelchair and they had a massive amount of luggage. The three humans and two canines were a long way from their colonial-style home in Franklin, Tennessee, as they were now moving to Ajijic, after considering only one home to purchase, on the second day of their initial visit, and making the decision in one day.

Judy is a Senior Olympian, who has competed in shooting events, badminton, horseshoes and table tennis. But one of the greatest accomplishments her family is most proud of is that she introduced the art of iris paper folding to the senior center in which she was a volunteer to make greeting cards. These greeting cards, cut and folded to create a three-dimensional circle, like an eye in the design, sold for $3 each and over eight years earned her group, the “Card Crusaders” $70,000 to $80,000 that were donated to the maintenance of their senior center. Their clients included the Nashville zoo, the airport and Merrill Lynch.

“The first time I showed the ladies how to do it,” Judy recalls, “they stayed all day. Some of those ladies said that being involved and making these cards literally saved their lives. Otherwise, they had no place to go and they had nothing to do.”

Allan and Craig have been together 16 years and have been married since 2012. Craig took Allan’s last name so that there wouldn’t have been confusion for their son who was in grade school. Allan had a career in purchasing, working for large corporations and Craig was an implementation manger after retiring as an airline steward. Together they had a moving company and owned restaurants.

For years, Allan and Craig had been coming down to Nayarit, to the town of San Francisco, nicknamed “San Pancho,” to attend an international music festival in February. There, a group of friends and friends of friends, some of whom Craig has known since his high school days in Rockford, Illinois, would rent a big house, as Craig says, “mostly for camaraderie and relationships. Some of them were very avid about Mexico.” Allan and Craig even tried to buy a home in San Pancho, but someone else purchased it just hours before they planned to make their offer.

“We were going to retire and be the Golden Girls living down in Mexico,” quipped Craig.

Later, their friend John, identified lovingly by Allan and Craig as “their ringleader,” told them that he had researched Ajijic’s glorious weather and large gay population, and recommended a visit. Thus influenced, Allan and Craig came down two days ahead of their next annual beach foray to see if it were true.

Allan and Craig checked into the Hotel Lindo Ajijic to research the area. While there, they couldn’t help but notice the sign for the open house right next door. Curious but guarded, Allan warned his husband not to get too excited because they probably could not afford it. The house had a lovely pool and gardens, rooms enough for all three of them and guests. There was a mirador with a view of the lake and what they were to learn later, a great neighborhood with very friendly and helpful neighbors. The more they saw the more they loved it and it was what they both wanted. They told their real estate agent, who had planned to show them three other houses, to cancel the other visits. They had already found the place that was right for them.

That night they sent Judy pictures and were especially excited to show her the dedicated light and airy artist studio that would be hers. They told her the price, which was less than what she expected for such a lovely house, and she said just two words: “Buy it.”

For the flight, their biggest worry was about their dogs, Bella and Beau. Traveling into Mexico would be a first for them. The trio decided that they would buy a ticket for Beau and he would have his own seat in the passenger section, serving as Judy’s comfort animal. Their plan was to have Bella ride with them onboard the plane in a carrier under the seat in front of them. Craig worked with Bella for weeks beforehand being inside the carrier and being carried by him. In order to make the dogs more comfortable, including avoiding layovers, the trio drove all the way to the airport in Atlanta, so it would only be a three-hour trip to Guadalajara. In Atlanta, the person at the Delta Pet Desk was very helpful and even directed them to the pet lounge, where the dogs could relieve themselves and if their owners had the inclination, even have a shower.

At the Guadalajara airport, it was late at night and they were the last passengers to get to customs because they had taken so long to get all their luggage collected, the dogs set up, and push Judy in the wheelchair, etc. They thought they made quite a spectacle. Their last step was to press the button that, if it indicated red, would mean a protracted and thorough search of their luggage and other belongings. If it flashed green, they would be free to go immediately. The trio had a very strong feeling the customs personnel were rooting for them as much as they were to get the green button.

They pressed the button. The light showed green. Everyone rejoiced, including, they believed, the customs officials, but in secret.

According to the group, “We had been talking about this move since February of this year. We said that after everything was unpacked, all the headache, the drama, all the trepidation, the good and the bad was behind us, we would crack open a bottle of champagne to celebrate that we had arrived.”

And they did; from the little liquor store down the street.

Their only regrets are that they should have brought more. Judy wishes that her paintings had come with her. And all of them wish they had brought more clothes and blankets for the cool weather they were not expecting.

It has been three weeks since they have been enjoying their stylish modern Mexican home. The previous owner had renovated it and the trio were the beneficiaries of her skill and care. There are lots of levels and rooms with different dedications, all beautifully done. The doors to Judy’s artist studio with the commodious fridge are flung open. The rental car sits in their beautifully tiled garage. Even Bella and Beau have a small room for their doggie accoutrements. Allan’s loom is in place in the bedroom and so is the painting of their former home, a colonial with a white picket fence. Lined up in their “three-butt kitchen (according to Allan, a kitchen that is large enough to accommodate three people)”, Allan has his cookbooks, from he is committed to apply himself to expand and hone his culinary skills. The dogs lounge around the terrace, in the patio next to the two-bedroom casita and take walks with Craig around the neighborhood.

Craig has vowed to learn the Spanish language, make new friends, teach the dogs to swim and take care of his family. They all look forward to joining the neighborhood for their regular get-togethers at each other’s homes. They still marvel they have been able to dine alfresco all the time and there are so many restaurants from which to choose. Craig has a plan to organize the homeowners on the street to have their electric wires dug underground. He does wish that everyone would leash their dogs and clean up after them.

They had tripped up twice during their move. Once was that they hadn’t had their papers stamped correctly when entering Mexico to start their new lives, so they had to find and lawyer to make the corrections. They had gone through all the trouble of getting their permanente papers and had not noticed that the officials had mistakenly given them a tourist stamp.

The other was a mishap that could have been much more serious. After they had agreed to purchase the house, they had to come back to Ajijic and pay for it. But on the trip down, they had discovered that Judy had left her carry-on luggage in the car in Tennessee and in it were various subscription drugs and cosmetics, all of which she was afraid she would not be able to replace immediately in Ajijic.

“In my carry-on bag, I had my medication, all my jewelry, all my makeup,” said Judy.

“I had no lipstick, no nothing. The Walmart in Tennessee is extensive, but at the Walmart here at Lakeside, it’s different. Here, you go into this little space and you choose from whatever limited selection they have, and then you have to pay for it in that section before you can leave to go the rest of the store.”

But more important than the limited selection of make-up, they worried about replacing Judy’s blood pressure medication, which could be serious. Judy, however, took a fatalistic attitude. ‘If I live, I live. If I die, I die,” she said.

Their ingenious solution was to contact their back-alley neighbor in Tennessee, who went into their house and took pictures of Judy’s larger set of medication in her home. They showed the pictures of the medication to the person at the local Ajijic farmacia, who said the Spanish equivalent of, “Yeah, we got that.”

“It was so wonderful to get those prescriptions,” Judy said. “It was God- driven. If that would not have happened, I would not have known that I could have gotten my prescriptions here. Everything that we did went according to what I prayed upon. When we first talked about moving here, I prayed, ‘Should we do this Lord? If we should, just open the door. Let it happen. If it is not, just shut that door and lock it.’

“Every obstacle we had we overcame easily. We worried about the permanente. We worried about the move. Getting the mover. Just everything. Every door just opened. Then when I forgot my prescriptions. I thought, ‘Well, I live or die.’ But when we got here, what a burden it lifted that I could easily get them. God opened another door.